Director Iram Parveen Bilal’s thriller has credible characters, pace and drama, plus a social conscience as a beautiful young journalist, Fatima, tangles with a ruthless village landlord over the death of her beloved maid.
For once, neither the scenes of Karachi partying nor those of terrified villagers are overdone, and Fatima is no fearless, gung-ho heroine: she is aware of the risks of cajoling a cowed village community into rebellion.
As with a number of films where reformers take on feudalists, it’s the presence of the urban media that makes the difference. In reality, reporters and TV crews intervene in only a tiny minority of cases, leaving a structure of violent, misogynistic, corrupt practices in place. But that’s a post-film reflection and not the concern of Josh, which is a remarkable debut feature.
Nevertheless, Bilal is aware of the bigger picture: “Josh is inspired by Parveen Saeed’s Khana Ghar movement [www.khanaghar.org.pk] and her concept of ‘erase hunger to erase crime’ by setting up affordable meals in and around Karachi’s slums. The film is also a tribute to all the innocent victims of retribution crime in feudal Pakistan. Josh provides insight and stimulates dialogue that can lead to positive change.”
The film employed an all-Pakistan crew and on 23 and 24 July becomes the first-ever Pakistani film to be screened by the London Indian Film Festival.
* London Indian Film Festival
* Khana Ghar movement

There is a town “Khuda Ki Basti” in outskirts of Karachi. It is home to very poor families who are merely surviving. I came across the story of two Parveens here, one providing food for the body and the other one for the mind. Which is more important, you decide!

Parveen Saeed: Khana Ghar, Food for Rs3 (3 Pakistani Rupees)
“Mother killed her own children because she could not feed them”. We read such news often and then move on but years ago one such news changed Parveen Saeed’s life, forever. She decided to help and started cooking extra food at her home for hungry. We can’t manage like this, family advised. So she moved from a middle class to a poor people’s town Khuda ki Basti and established first Khana Ghar (Food Home). This place provides food for Rs3, though it costs Rs20. Where does Rs17 come from?

Parveen Saeed serving at Khana Ghar
Parveen explains, I started from home, family got involved, friends followed. Then we got known and support started pouring in. Some charities are providing food for free, why do you charge Rs3? There are two reasons, Parveen illustrates. One, people tend to care less for free food so there will be wastage, and two, charging encourages the person to work and earn few Rs to get food for the family.

.
Parveen is getting busier despite food cost sky rocketing. There are two Khana Ghars and four pickup points (mobile food homes) functioning at present. Current political and economic situation is ever increasing the number of hungry. Some people can’t even pay a single Rs. We don’t bar anyone from eating. If one can pay, fine, otherwise he is welcome for free.

People Eating at Khana Ghar
Parveen understands that her scheme cannot eradicate the hunger. To eliminate it we need to change our thoughts. We need to understand that country needs to develop an infrastructure that provides and promotes economic opportunities for people to earn respectably.
www.khanaghar.org.pk 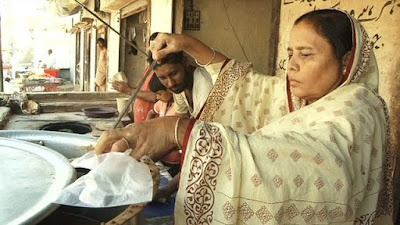 KARACHI: Some 25 kilometres from the city centre, the streets of Khuda Ki Basti have the appearance of the type of slums found all over the metropolis.

More than 20,000 inhabitants live here, with half of them migrants from other cities and towns, and all stuck in the daily grind of fighting off poverty to keep body and soul together. Like others, every single face in this Basti appears hopeless and every family seems trapped in a cycle of privation.

But a few of them have chosen to make it a little different. Perveen Khalid is one such person, who for the last five years has been striving to kill at least the hunger of her people. She runs a restaurant that offers meals at prices as low as Rs2.

Perveen’s Khana Ghar (meal house) is in the centre of Khuda Ki Basti and serves meals three times a day to around 90 poverty-stricken people of the neighbourhood on a daily basis. And with each passing day her commitment to help grows stronger.

“I started this project on my own in 2002,” she says sitting at her almost 100-yard Khana Ghar, which has bamboos on a sandy floor with woven mats around the eatery to maintain privacy.

“I realised hunger is not a source of pain and humiliation only for individuals, as it affects the social system too. It forces suicide attempts, it causes family break-ups and, of course, it makes one think that he or she is worthless.”

Fired up with an urge to help but unequipped with resources, Perveen convinced her husband and two daughters and started cutting back on “luxuries” in 2001 to raise finance for the dreamed Khana Ghar in the nearest poor locality from their residence ñ Khuda Ki Basti.

The four-member family agreed but it meant no picnics, no outings, no shopping and no entertainment for them. Their target was simple — save money for Khana Ghar, which finally started serving in 2002.

“Initially it cost us Rs300 a day to serve more than 40 people. I wanted to offer a free meal to each and every needy person of the locality but I thought it could send a wrong message. It is not a charity service. It is a place for those who can afford Rs2 to have a onetime meal, and that we decided to charge for,” Perveen says.

Her five years’ continuous and calm journey has now made this Khana Ghar a popular brand in the neighbourhood, where men, women and children are seen enjoying meals. The queue in front of the restaurant is using the take-away facility.

Perveen gives full marks to her family, who made financial sacrifices and gave her a cushion to take an initiative. She also counted her luck to find aides like Habib Bhai, who has been running Khana Ghar’s kitchen since its inception.

“I can’t even imagine to leave Baji (Perveen) and this Khana Ghar,” he says. You can get a better job with more money but this can’t win respect and satisfaction.” A strong believer in values, Habib Bhai says the daily menu of Khana Ghar also reflects respect for the people, who are enjoying meals here.

“Rs2 isn’t a face saver. We try to meet all formalities while serving food. We have meat curry on the menu every week with vegetables and a variety of lentils. The style of our operation is purely commercial but not the spirit.”

The venture with a cost of Rs300 a day, Khana Ghar now needs Rs2,500 to meet the growing demand from the area’s people. The restaurant serves those who have nowhere else to turn to.

“It (Khana Ghar) seems to me as the last hope to complete the last days of life,” Ali says, who has been abandoned by three young sons amid declining health and advancing years. To keep Ali’s hope alive and strengthen his trust in humanity, Perveen finds connections within her well-off family and receives donations from his brothers, sisters, nephews and nieces to meet the more than Rs60,000 monthly expense of Khana Ghar.

But she wants to do more to join in the fight against poverty. “I am not tired but after five years I feel more energetic than previous days. However, I want more people to come forward. We don’t need money neither we want any government recognition. We just want privileged people with a realisation to come forward and make a single Khana Ghar in each such locality to make a difference.”

Though she finds herself alone so far to run Khana Ghar, she is not ready to give up. For the last few months she now has another facility for Khuda Ki Basti. Peveen’s Dawa Ghar is now there to offer treatment to the sick. “We have set Rs10 as fee to get people facilitated from Dawa Ghar,” she says. “But it doesn’t mean one who can’t afford even Rs10 returns untreated.”